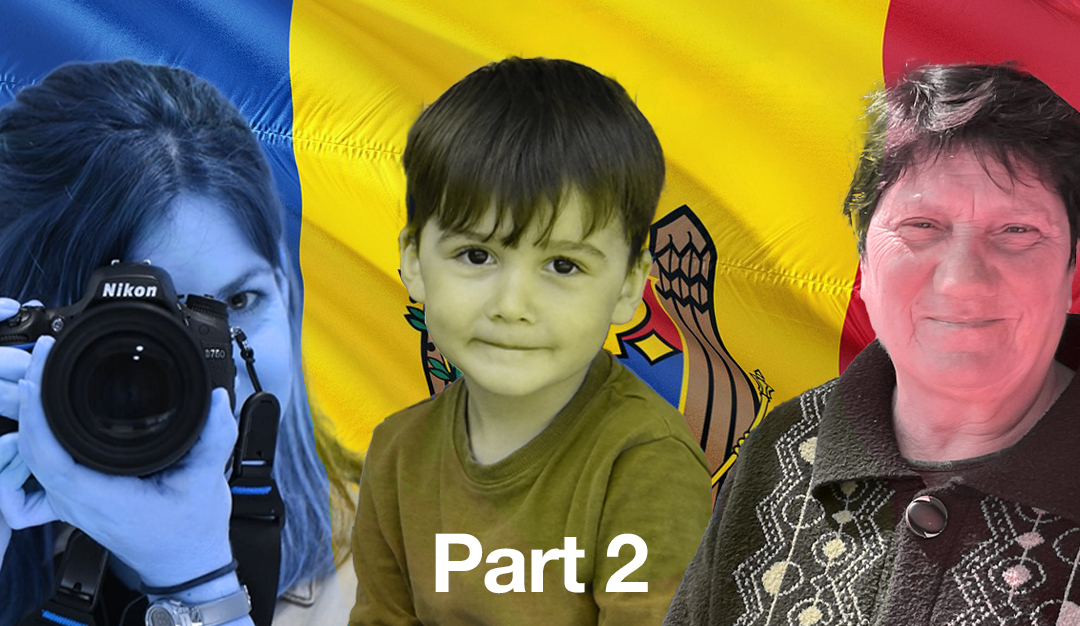 Posted at 04:35h in Uncategorized by Meagan Briggs 0 Comments
Share

This post the second in a series. Find part one here.

Much of our outreach plans seemed to change daily, due to the ever-updating situation. For example, we had planned to host a clinic in Transnistria—a sensitive territory between Ukraine and Moldova—but there were a couple bombings there the same day my team was flying over. With the unstable situation, we turned our attention to serving wherever there was a need and where we were welcome, meaning that we served as many Moldovans as we did Ukrainian refugees who had become immersed in the villages.

As soon as I stepped inside the village hospital where we’d be serving the next three days, the trapped chill of concrete seeped through my jacket. When one entered the foyer, a hallway stretched to the left, where a series of doors lined the dim, sterile hall. My first impression was that I had wandered into a 1940s hospital. As no patients were due to show up until the next day, I poked my head in room after room. Each was staged perfectly with antiquated equipment.

Within these rooms, we hosted triage, two doctor’s rooms, and a pharmacy over the next three days.

While we served many locals, Ukrainian refugees who had been welcomed into the small village also came to our clinic. I remember one woman who wanted to see a doctor due to heart trouble. Though she was well-dressed, she wore the same clothes each day we saw her. She refused to let me interview her, saying she was afraid telling her story would make her upset and affect her heart.

My favorite moment from these clinic days was when a woman, who had come to our clinic the day before, returned, giving us a loaf of sweet bread and sharing with me her poems. She told me that because of the reading glasses she’d received, she could now write poetry again. As a writer, I understood that this ministered to her heart, body, and soul, and would affect her daily life for years to come.

When it was time to drive from southern Moldova toward the capitol, I wondered what these villages were going to do if Russia invaded, using this tiny, non-NATO nation as a stepping stone to attack Ukraine from another direction.

We settled in the capitol city of Chișinău for the rest of our time in Moldova. On clinic days, we drove out of town and set up in new locations.

What I saw at our clinic in Anenii Noi, set up in a church, was tireless self-sacrifice on the part of the pastor, his family, and the congregation. Mariana, the pastor’s wife, had only had two days off in the two months since the war began. Their college-age son, Marcos, had been helping us translate at clinics.

Ukrainian refugees were staying in the church’s upstairs offices and spare rooms. Some stayed a few days, others a few weeks. One man I spoke to, Mansur (not his real name), had three young children whom he’d fled Ukraine with. He’d lived in Odesa for twenty years, having immigrated from the Middle East. Now he was a man with no country to return to. He told me his story of fleeing Ukraine, looking for work, having a car accident in Moldova, and not knowing where to go next, as somberly and matter-of-factly as if it were a history lesson. He seemed so weary that if I had asked him to smile, I’m not sure he would have remembered how to. 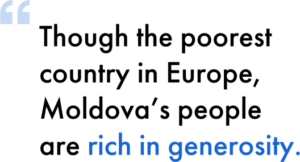 On Saturday morning, we were blessed to set up a clinic in Dănceni, a village outside of the capitol, in none other than the mayor’s office building. The mayor was a thirty-year-old woman with a genuine smile. When we realized we were going to be cramped for pharmacy space, she unlocked her personal office for us. While she hosted a Romanian delegation upstairs, we hosted locals of all ages downstairs.

This was just one example of the many ways I saw Moldovans give what they had for the sake of helping refugees and each other. Though the poorest country in Europe, Moldova’s people are rich in generosity.

Sadly, I don’t have many clinic reflections from this day, as I began coming down with what I later “fondly” called the Moldova Flu of ’22—a non-Covid souvenir. In fact, three of us came down with it at the same time and spent Saturday afternoon and Sunday in our hotel.

But while we were down, the rest of our team was up and serving. Because they were now minus one doctor and pharmacy volunteer, the team hosted a grocery giveaway to the Roma people. From what I understand, it was a lively experience. Let’s just say there was no social distancing when there was free food to be had.

Our last day of clinics was May 9, Victory Day, a national holiday that many were concerned was going to produce conflict due to the holiday’s Russian basis. To be safe, we worked well outside of the city.

With our only directions being, “Look for the church with the blue roof,” we zigzagged Bravicea’s few washed-out roads and eventually found the church that was hosting our clinic. Here, as usual, we found a line of people patiently waiting for us. Many of them were refugees and were staying at the church. The room where we set up our clinic had beds pushed to the sides to make room for our tables and equipment.

As hard as mission trips are, seeing suffering up close and not always being able to help, the last day is often the hardest. It’s the day of saying goodbye to those whom you’ve worked alongside and grown close to. For us, that was our interpreters, one of our drivers, and a local coordinator, Doina.

Doina had assembled a team of interpreters with the best of hearts. All of them were under 21, and she’d worked with many at the Palanca border, helping refugees coming into Moldova to get their bearings. After you’ve shared a two-bathroom house with over twenty people, divided meals and van seats, and overcome language barriers together, you begin to feel like family.

The temptation during goodbyes is always to promise to return. But who is really able to keep such promises in these circumstances? Knowing there are relatives in my own country whom I haven’t been able to see in a decade, I can never allow myself to say I’ll return anywhere. But I do take a snapshot in my mind of each person I’ve come to treasure, give them one last hug, and ask them to keep in touch. I then return home, and they return to everyday life. And as I’ve observed over the years, the proverbial ripples caused by a visit begin to space apart and diminish until all is as it once was.

This ripple analogy used to discourage me, but not anymore. Because I know, even though ripples are temporary, nothing is wasted for having existed once upon a time. As Mother Teresa said, “I alone cannot change the world, but I can cast a stone across the water to create many ripples.”

May we all keep creating ripples for those whose ponds are flat with worry, pain, and life without Christ.