Blessings supplies medicines, pharmaceuticals, and medical equipment to teams and clinics serving in some of the most remote, impoverished, and dangerous places on earth, including within the continental United States.

Our mission is to heal the hurting, build healthy communities, and transform lives. We accomplish this by facilitating medical missions primarily in developing nations by serving as a source of pharmaceuticals, vitamins, and medical supplies for medical mission teams, clinics, and hospitals.

In 1980, an early morning men’s prayer group at a church in Tulsa, Oklahoma, was planning a mission outreach to Guatemala. A member of that group, Harold Harder, a PhD pharmacologist and medical school professor, joined the team as its acting pharmacist after sensing a desire to minister to the physical and spiritual needs of Mayans. His role was to solicit donated medicines. At the time, Guatemala was in the midst of civil war. Despite the apparent danger, Harold and his wife, Linda, knew they had to be obedient to God.

After returning from the trip to Guatemala and after much prayer, the Harders were able to successfully obtain donated pharmaceuticals to help other teams going on similar short-term medical mission trips. In July of 1981, Blessings International was incorporated as a non-profit and opened its doors to a world in need of its service.

The ministry was originally created to serve as a source for donated and low-cost pharmaceuticals to mission trips. Today, Blessings International provides pharmaceuticals and medical supplies to clinics and hospitals in developing countries and to some in the United States. Blessings International has expanded its territory to work with churches, non-governmental organizations, universities, and medical institutions.

Today, Blessings International maintains a growing staff of over fifteen full-time employees and operates a 14,000-square-foot warehouse and repackaging facility, all for the sake of providing medicines and medical supplies to teams, clinics, and hospitals which are healing the hurting, building healthy communities, and transforming lives with the love of Christ.

Blessings International has provided pharmaceuticals to thousands of traveling medical teams going to more than 140 different nations since the ministry was created in 1981. In recent years, we've shipped an average of 250,000 lbs of medicines a year.

In a typical year, Blessings equips upward of 3,000 teams traveling around the world. Among those teams equipped are those that are the first to arrive, assess, and bring care to victims of such events as earthquakes, hurricanes, floods, famines, and even wars. Through the donations that Blessings receives, we are also able to help subsidize the medical costs for these emergency teams working in disaster zones as well as for teams working in indigent medical clinics in the USA.

Countless lives have been saved because of medicines that Blessings has made available at low or subsidized costs. Additionally, the medical personnel—including teams of doctors, nurses, dentists, and non-medically trained individuals, including clergy, volunteer, and professional aid workers—have carried to remote locales Blessings’ medicines and the love and good news of Christ.

We desire to share the love and compassion of Jesus Christ with all those we serve whether serving our customers, co-workers, vendors, or donors.

We desire for our customers to have an excellent experience working with our ministry through each and every encounter.

We aim to provide high quality products to the right customer at the right time, every time.

From our finances to our communication, we will be open and honest in our operations, transactions, and dealings.

We are grateful to those who support our ministry and will use all gifts in a responsible manner to benefit persons around the world in need.

We will celebrate the successes and milestones of our ministry, each other, and our lives. 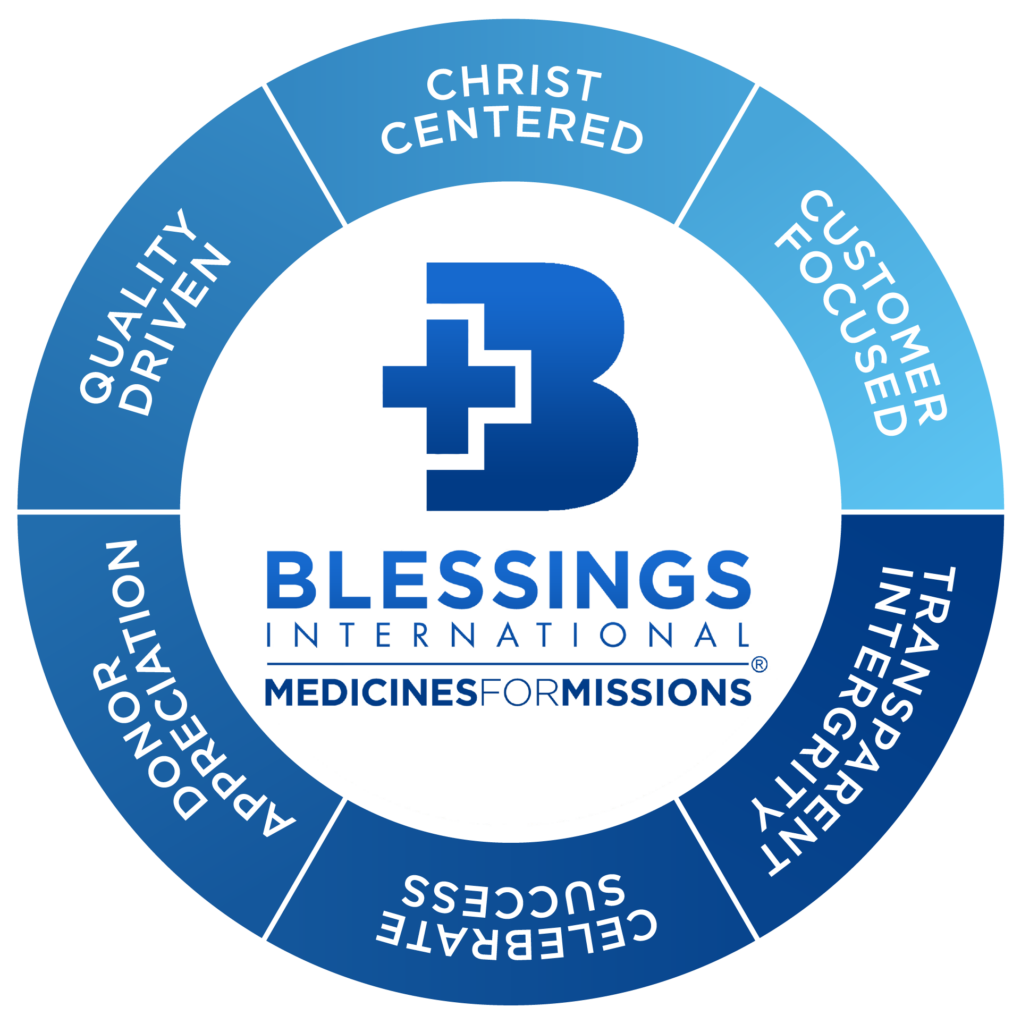 Our statement of faith

The One True God

The Deity of the Lord Jesus Christ

In Christ, all the fullness of the Deity lives in bodily form. The Son is the radiance of God’s glory and the exact representation of his being (Colossians 2:9; Hebrews 1:3).

The Fall of Man

Salvation is found in no one else but the Lord Jesus Christ, for there is no other name under heaven given by which we must be saved (Acts 4:12). Man is saved by grace, through faith, not by his own efforts but as a gift from God (Ephesians 2:8). God saves us through the washing of rebirth and renewal by the Holy Spirit, whom he poured out on us generously through Jesus Christ our savior, so that, having been justified by his grace, we might become heirs, having the hope of eternal life (Titus 3:5-7).

All who repent and believe on Christ Jesus as Savior and Lord are commanded in Scripture to be baptized in water (Matthew 28:19; Mark 16:16).

Present Work of the Holy Spirit

The Unity of All Believers

In Christ, we who are many form one body, and each member belongs to all the others. For we were all baptized by one Spirit into one body (Romans 12:5; 1 Corinthians 12:12).